Pietro Togneri was born in Pedona in the province of Lucca, Italy. There was little work in the area, and like many others of that generation, Pietro became an economic mig

rant. Some emigrated to America, but even more from this region came to Britain, and in particular to Scotland. Pietro was one of them, arriving in the 1880s when he was a teenager. Like many others from that area, he made and sold plaster figurines along the way, to help fund the journey.

Pietro eventually settled in Stirling (apparently it reminded him a little of home, with its cobbled streets and surrounding hills) and bought a shop in Baker Street where he sold fish and chips. The café was popular for its hot peas and pea broth.  Later, Pietro moved to another shop further down Baker Street and his family lived in the bigger flat above the shop.  Pietro was a successful businessman who gradually brought over from Italy other members of his family, and in 1901 he was able to buy Casa Togneri along with several fields in Filecchio.  He chose this area as it was near his home town of Pedona and in the home village of  his wife, Elita Biagi. 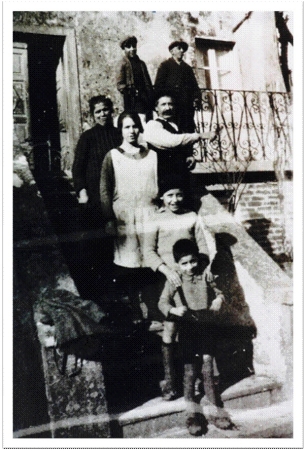 He bought the house for his mother and father who stayed there until they died with Giulia Rigali, his sister, and her family. Pietro subsidised the house for many years, and his family returned to Italy frequently whilst living in Scotland.Pietro and Elita had nine children who survived to adulthood: Vittoria (Vi), Alberto (Bertie), Aldo, Rina, Bruna, Roberto (Bobby), Esterina (Ester) Lina and Peter.   His daughter, Bruna Togneri moved into Casa Togneri when she married an Italian called Osvaldo Fanani.  They lived in the house for many years and always accommodated and made family members from Scotland (and further afield) very welcome when they returned to visit.

After Osvaldo died in 2010 the house was in need of fairly major refurbishment.    The family of Pietro and Elita Togneri’s eldest son (Alberto) bought Casa Togneri in 2013 and began to renovate the house in 2014.   It remains an important link for the extended family who now live around the world.   Two neighbouring houses within Filecchio are still owned by the family of Bruna Togneri (Pietro’s daughter).  They look after Casa Togneri on a day to day basis and always make returning family most welcome.